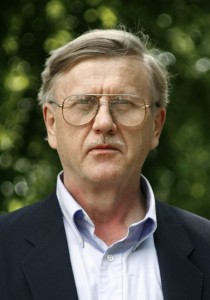 Internationally renowned pianist, recording artist and pedagogue, Polish-born artist ADAM WODNICKI has received acclaim on  five continents for his dramatic interpretations, poetic sensitivity and brilliant technique. He can be heard on Muza, Folkways, Centaur, Wergo, Altarus, Klavier, and Dux labels. Recordings of cello and piano sonatas by Dzubay, Muczynski and Shostakovich with cellist Carter Enyeart (Centaur) and solo discs with piano works by Ignacy Jan Paderewski (Altarus) received rave notices: ‘one of the year’s best contemporary chamber music albums’ (Chicago Tribune), ‘incontestable brilliance’ (H.C. Schonberg in American Record Guide), and ‘a recording by a master pianist’ (Journal of the American Liszt Society). Wodnicki’s recording of the three Piano Trios by Robert Muczynski (Centaur) was chosen by a Fanfare critic as one of the top five albums on the ‘Best of 2004’ list; and the 2008 release on the Dux label of the Piano Concertos by Serocki, Baird and Krenz received a Polish Phonographic Academy nomination for the 2009 Fryderyk Award. Adam Wodnicki has also made numerous radio and TV recordings, including recordings of piano concertos by Serocki, Baird, Krenz and complete works for piano and orchestra by Sigismond Stojowski.

He has concertized and taught in North and South America, Europe, Africa and the Far East. He has appeared in such musical centers as Kraków, Warsaw, Helsinki, Chicago, Los Angeles, Boston, New York, Tokyo, Seoul, Singapore, Taipei, Tel Aviv, Pretoria and Prague. In recent seasons he has appeared at prestigious international music festivals such as Arundel Festival in England, Les Rencontres Internationales Frédéric Chopin in Nohant and Nancyphonies in Nancy (France) and the Chopin Festival in Mariánské Láznĕ (Marienbad), Czech Republic; he has also performed and taught in Japan, the Czech Republic, Bulgaria, Ukraine, China, Hong Kong, Korea, Israel, South Africa, Colombia, Spain, Portugal, Italy, Argentina, and Austria. Since 1991 he has returned yearly to his native Poland for highly successful tours; his appearance at the Paderewski Festival in Kraków was described by the press as a ‘pianistic sensation’ (Czas Krakowski).

Adam Wodnicki studied with Jan Hoffman, Guido Agosti and György Sebök, and his artistic roots can be traced to the traditions of Fryderyk Chopin, Franz Liszt and Ferrucio Busoni. Three-time prizewinner of the annual Chopin Society National Piano Competition in Warsaw and the recipient of three prizes at the 8th Festival of Polish Pianists, Wodnicki is Regents Professor of Piano at the University of North Texas in Denton. He has served on juries of international competitions and is a performance editor for the Musica Iagellonica’s first ever edition of The Complete Works by Paderewski. In 2010 he began a collaboration with the Eufonium Publishing of Gdynia, Poland, and has since edited over 30 volumes of piano music of 19th and 20th century Polish composers, such as Piotr Perkowski, Stanisław Niewiadomski, Tadeusz Joteyko, Antoine de Kontski, Juliusz Zarębski and  Édouard Wolff.  Wodnicki’s article on Chopin appeared in The European Journal for Pianists and Teachers.  In 2014, he was awarded a medal Gloria Artis by the Ministry of Culture and National Heritage of the Republic of Poland; in 2015, he was honored with the statuette Golden Owl by the Editorial Board of periodical Jupiter (Vienna, Austria) for his achievements in the field of music.  Adam Wodnicki is a Steinway Artist.

We use cookies to ensure that we give you the best experience on our website.Ok